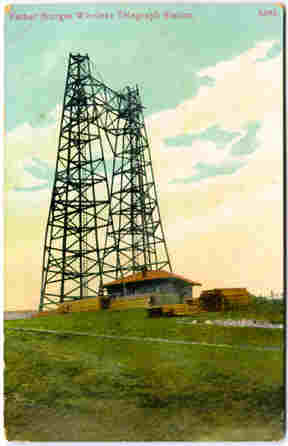 The Murgas ARC normally meets monthly on the first Wednesday of the month at 8:00pm. at the Luzerne County Emergency Management Building, 185 Water Street, Wilkes-Barre, PA 18711 Guests are always welcome. The meeting usually features an informative program on a radio related topic after a brief business meeting.  Please check the current issue of the MARC Times or our Groups.io and Facebook pages for updated meeting information.  Get a map to the meeting here.
Due to COVID Restrictions, our meetings may temporarily be held via teleconference.  Current information on k3ytl.groups.io

"Contest Contest DE K3YTL - Kilowatt  Three Yellow Traffic Light calling!"  You will also hear K3YTL on the air during Field Day and during the Pennsylvania QSO Party in October.  The Murgas Amateur Radio Club has won the trophy for  highest scoring club in the  PA QSO party several times!    K3YTL is also active on the HF bands, members taking turns operating from their home stations with the Club call on all modes and bands.  "QRZ?"

Our club members are active in the June and September VHF contests, most DX, stateside and digital contests.  Several Murgas members  also did well in the 2014 ARRL Centennial Challenge.

The club also has an active ARRL VE Team, Exams are scheduled and announced as the VE team sees a need.  An exam session is also held at our Hamfest in early July.

The Club sponsors  a network of APRS Digipeaters in Northeastern Pennsylvania using the call W3NEP and K3JML.  These Digis were established by Mike Navin N3FJA (SK).

The Murgas ARC is proud to sponsor a yearly scholarship awarded to an college student/amateur.  The scholarship is administered by The Foundation for Amateur Radio (FAR).

In April 2022, The Murgas Amateur Radio Club, NASA, The University of Scranton and Misericordia University cooperated to bring NASA Astronaut Colonel Doug Wheelock - KF5BOC to our area for 2 informative and entertaining presentations.
The presentations can be viewed on the Murgas ARC YouTube Channel     WNEP-TV's Meterologist John Hickey interview of Col. Wheelock

The MARC Times, our monthly newsletter is edited by (Volunteer position currently unfilled).

Articles for publication may be submitted to the club's mailing address or to  marctimes@murgasarc.org via e-mail.

The trustee of our Club license and Net Manager is George Miklosi K3ZK.

Our Librarian is Ian Kellman K3IK.

The Club is named after Father Joseph (Josef) Murgas, a Slovak priest who was an early communications pioneer. His first experimental broadcast from Wilkes-Barre to Scranton, Pennsylvania took place on April 27, 1905. Although others had previously succeeded in transmitting over water, Murgas was first to successfully transmit over land.  Murgas also developed a tone system for use in radio transmission.  Father Murgas' transmitting towers in Wilkes-Barre are pictured on our club's QSL Card as well as the cards of several of our members.  Father Murgas' accomplishments have been recognized by The Pennsylvania General Assembly in 1987 House Resolution 25.


Was Josef Murgas the "Father of Radio"?  Check these links and decide for yourself. 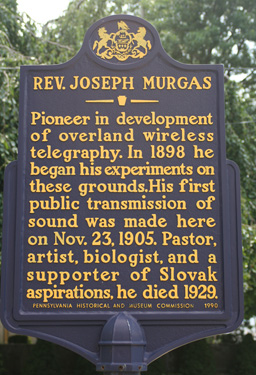 Information on Father Joseph Murgas, Radio Pioneer from a student project at Wyoming Valley West High School (link may be down)

A book on Father Murgas "Little Journeys to the Homes of the Great Scientists: Joseph Murgas" written by Joseph Weber

The callsign K3YTL was originally issued to founding member J. Campbell Collins.  In 2006, the Club added in memoriam, the call of one of our groups founding members - Carl Kollar, K3JML to honor his years of dedication and service to the Club.  Plans are to use this call for contesting and special event stations. 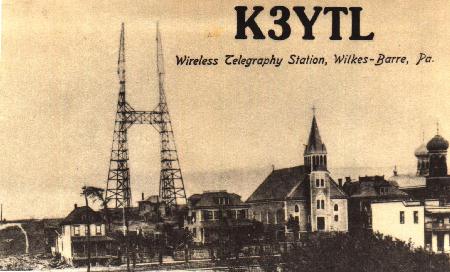 Click on the QSL Card to e-mail The Murgas ARC Groups.io group.